Vianney Halter was born in Suresnes, in Paris outskirts, in 1963. His father was a train driver for French National Railways. In his oldest memories, he remembers his father bringing home old machines and mechanical parts that fascinated him.
In a way, early exposure to powerful locomotives, steam engines and control instruments might be the origin of Vianney‘s attraction to mechanics and engineering.

At the age of fourteen he set his mind on deepening his knowledge ofmechanics, took the train to the capital and enrolled himself at the Ecole Horlogère de Paris (Paris Watchmaking School).
After graduating in 1980, Vianney Halter spent the first ten years of his professional life restorating antique horological items. This gave him a broad knowledge about the art of horology.
Being independent since 1994, he produced various timepieces for famous brands such as Harry Winston, Breguet and Audemars Piguet, among others.
Starting 1998, he also dreamt up and developed his own collection of wristwatches. His creations have been welcomed as avant-garde pieces and are considered as instigators of a new trend in watchmaking.
Vianney makes atypical timepieces in a stunningly traditional manner, using his unique style, his own technical patents and trademarked designs.

As a matter of fact, when he presented his first model, the Antiqua Perpetual Calendar in 1998, the watch was immediately regarded as a “relic from the future”. This enabled him to assert his creativity and granted him access to the AHCI.

In the following years, Vianney Halter created 10 different wristwatch models. However, the high level of craftsmanship keeps the production at a confidential level, as less than 500 watches bearing Vianney Halter’s signature were ever produced.
In 2013 he unveiled his new creation, the Deep Space Tourbillon: a futuristic three-axis tourbillon under a crystal dome. As with the Antiqua, Vianney innovated and created general surprise with a previously unseen mechanism and bold design.

These 22 years of independence spent perpetuating watchmaking art and his contribution to the contemporary horological landscape have won him eight prizes.
The quality of his expertise placed him as one of the 64 players who were selected for the White Book of the FHH (Fondation de la Haute Horlogerie). The white book aims to delineate the idea and principles of Haute Horlogerie.

Vianney works like an artist, expressing his creativity and his style through the skills he masters: horological construction and horological arts. 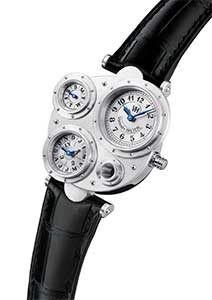 In 1998, Vianney Halter presented a creation that caused a stir in the watchmaking world: the antiqua, his fi rst watch. The watch was immediately dubbed as a relic from the future and his design was widely considered avant-garde. A watch from the future. Albeit not ours, but the future as it could have evolved from the Victorian era. A future inspired by Jules Vernes and H.G. Wells.
This piece was designed as an embodiement of the spirit of the marine chronometers, linking antique time instruments to the contemporary collector’s wrist.
As a testimony to horological tradition, the Antiqua features a very classical complication: the perpetual
calendar, with a peculiar geometry that lends this piece a quircky style. For ideal readability, the Antiqua’s complete calendar informations are split between 4 riveted portholes. Following order of ecreasing diameter, one can read: hour&minutes, month/leap year, day of the week and fi nally the date.

Each dial is made in noble metal, embellished and hand-engraved.
The case itself is built out of nearly 130 parts (including 104 rivets), each part being refi nished and decorated by hand. These complex and very thorough aesthetics are a refl ection of the exceptional mechanism they enclose.

Another nod to watchmaking tradition is the “mysterious” mass rotor conceived by Vianney Halter. There is no visible part between the peripherical rotating mass and the caliber center. This poetic invention allows a full untroubled view on the VH198 in-house calibre as if it were a simple hand-wound movement. 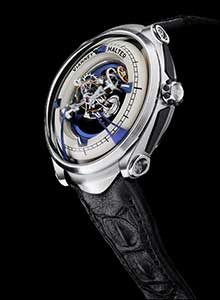 In 2011, Vianney Halter was awarded “Best watchmakerdesigner” at the GPHG.
He considered that as an honor and it kindled his creativity. Vianney then developed a new concept, inspired by Space exploration.
Since early childhood his imaginary universe has always been cultivated by all the infl uences that he has received when reading science publications, Science-Fiction novels, as well as watching space travel TV series and movies.

He had in mind images of a unique item and set his mind towards making it real.
to explore strange new worlds, to seek out new lifeforms and civilisations have, at all time, held a great fascination and motivated Mankind.
For antiquity sailors, marine chronometers were the supreme time instruments that made possible explorations of seas. They were also a means to keep a link with homeland.
Space… the fi nal frontier, what would be the ultimate time instrument necessary when the mission is to boldly go where no man has gone before ?
2013: Vianney Halter presented his new timekeeping device, the Deep Space Tourbillon.
A Four-dimension representation of the universe, as a reminder of our own earthly familiar reference frame: Length, Width, Height… and Time, materialized by a huge central 3 axis tourbillon and surrounded by the display of time.
Two curved blued titanium hands lean from the watch periphery and spread above the tourbillon and the solid engraved silver ring dial.
A sapphire dome 40,6 millimeters in diameter covers the circular titanium case and highlights the tourbillon in all its details.
The rotation periods of the 3 axis of the tourbillon are respectively 40 seconds, 6 minutes and 30 minutes. Due to these asynchronous revolution speeds, the tourbillon moves in a never-ending ballet, displaying second after second a new perspective into the depths of the complex mechanism.