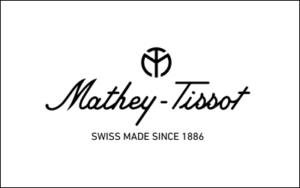 NEAR THE CENTER OF THE SWISS JURA MOUNTAINS, IN THE CANTON OF NEUCHÂTEL, AT AN ALTITUDE OF 3.300 FEET, LIES THE VILLAGE OF LES PONTS DE MARTEL, NESTLED IN ONE OF SWITZERLAND’S MOST BEAUTIFUL VALLEYS. HERE, IN THE YEAR 1886, EDMOND MATHEY-TISSOT FOUNDED THE MATHEY-TISSOT WATCH COMPANY. THEN BEGAN A UNIQUE AND AMAZING STORY BASED ON QUALITY, INTEGRITY AND PESONAL SERVICE.

Mathey-Tissot initially specialised in « repeateater » watches, timepieces that chime the hour and halfhours. Soon afterwards, the company undertook the production of chronographs (stop-watches), crafted with such ingenuity and precision that they were immediately succesfull. Mathey-Tissot was also quickly recognized as a manufacturer of high quality movements on the basis of renowned sketches such as the one for chronograph movements of Le Coultre manufacturer. Prestigious customers of Mathey-Tissot for complete and finished watches and/or for movements were : Zenith, Vacheron & Constantin, IWC, Movado, Ulysse Nardin, Girard Perregaux, Concord, Jaeger, Le Coultre, Longines, Heuer, Piaget, Breguet, Alpina, Tissot, Hy. Moser & Cie…

In 1890 the Boer War between England and South Africa erupted and and the demand for Mathey-Tissot’s fine watches became so big that a new larger factory was built. Among the orders received at that time was one from a jeweller in Scotland who had been commissionned by a local nobelman to supply a gold repeater watch to each officer belonging to his sun’s regiment as well as a sterling silver model watch for each enlisted mall. Small though it may appear today, that single order for 2‘500 watches was enormous by that time prevailing standards.

31 May 1903: Speed regulator for small wheels of repeating watches

18 August 1908: Alarm and ring mechanism with an 8 days power reserve

During the Key Obervatory Competition of 1914, Mathey-Tissot presented six chronographs, each with split-second timing. All not only passed the Class A rating with the mention of „specially good“ but one had a record never previously attained. Later that same year Mathey-Tissot followed this accomplishment with 2 other prestigious awards: Grand Prize of the National Exhibition of Bern awarded to Mathey-Tissot for his complicated watch movements and First Class Grand Prize at the Geneva Observatory for his Chronographs with adjustable counters.

As the years passed, a striking array of other honors was earned by the famed craftsmen of Mathey-Tissot.

In 1929, the company Mathey-Tissot is taken over by both sons of the founder Jean and Etienne which were both graduated from the Watchmaking Schools of Le Sentier and Le Locle.

Before and during World War II Mathey-Tissot continued his regular business of producing fine watches for jewellers throughout the world but also turned out thousands of timepieces for the United States armed forces and the British Navy.

After World War II and until the 70’s Mathey-Tissot, given his worlwide reputation due to his quality watches, continued to supply complete watches (movement, case, …) to prestigious brands such as Breguet for the prestigious Type XX and XXI.

In 1975, the brand is taken over by Mr Jules Elefant who was Mathey-Tissot distributor in the United States and moved to the Ponts de Martel with his wife and three children to manage the company. During this period Mathey-Tissot brand expanded all over the world.

Nowadays and since 2014, the brand belongs to Mr Alberto FRIGERIO who managed it from 1994 until 2013 and is managed by SWP Swiss Watch Partners SA, the exclsuive licencee of Mathey-Tisssot since 2017.

Today Mathey-Tissot offers a rare blend of expertise, quality, styling and personalized handling that unfortunately has all but gone from the watch industry. The key word is „Flexibility“. Buyers, large or small are not just numbers, they are names, partners and often friends.

The Mathey-Tissot story has really just began. Never satisfied and content to „sit on ist laurels“, the Mathey-Tissot team has big plans for the future. « Big » in the sense that new, innovative watches and ideas will continue to position Mathey-Tissot in the forefront of super quality Swiss Watch companies but « small » enough to never forget that relations and proximity with the customers are the most important key to success. 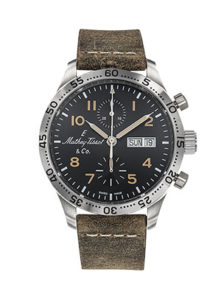