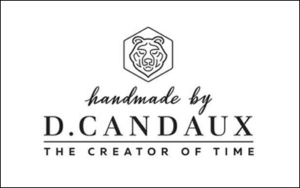 The new  DC 6 Solstice Titanium “cal.1740” handmade by the independent watchmaker David Candaux for Baselworld 2019, represents his contemporary reinterpretation of the classic half-hunter pocket watch form as it was used in the stressful, active environments found on land and the seven seas.

David’s specific vision were the forms found on antique captain’s watches, as well as many seafaring instruments such as compasses, wherein the viewing area, partially encased in metal, only allowed portholes for viewing the required indications. In this manner, the half hunter form provided excellent protection of the glass, hands and movement from shocks under extreme conditions.

This tourbillon creation by David Candaux taps into the historical period when horology was still perceived as a major science and watchmaking fell under the realm of mathematics, philosophy, and astronomy. This was an era when the quest for accurate timekeeping occupied the minds of the greatest inventors of European civilization. The DC 6 Solstice Titanium Half Hunter “1740” pays homage to these precision instruments of the past, timepieces that were in use by the explorers and master mariners of the 18th and 19th centuries. A novelty of the time, these highly accurate timepieces allowed ship’s captains to literally and physically carry the time of their departure harbor with them, and therefore calculate the longitude of their location at sea easily without requiring star-gazing, ephemerides, astronomical tables, and several hours of navigational calculations.

With this history at hand, the DC 6 Solstice Titanium goes a step further, representing a more radical stylistic interpretation and technical advancement in comparison to the classic historical half- hunter concept; simultaneously it represents a more futuristic development to the first models of the present collection. 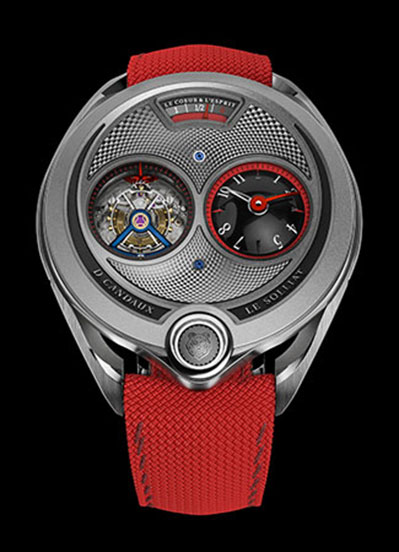 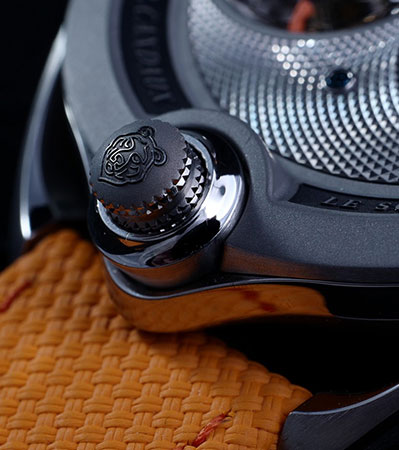 “The reinterpretation of a classic”

New visual impulses The first visual aspect one notices is the incredibly finely executed, complex decoration of the front face of the watchcase. It has been given a unique, engine-turned guilloche pattern named Pointe du Risoux that deliberately recalls the patterns of the local Risoux fir tree forest that surrounds the Candaux atelier. Created as a contemporary approach to antique guilloche traditions, this pattern was not only meant to be visually inspirational; it was also deliberately designed to invite the user to sensually engage with its complex surface, adding another level of interaction between the timepiece and its owner. With a subtle and completely contemporary touch, this guilloche patterned front cover has been created in natural titanium. This precious metal is one of David’s favorites due to its subtle glow and introverted elegance.

Asymmetrical display Set into this magnificently adorned front cover of guilloche finished 18K white gold, the timekeeping indications and open view of the tourbillon have been placed under two tiny spherical, convex shaped portholes of specially machined sapphire glass, with the power reserve situated under a small, separate arch of sapphire glass at the top edge of the case front.

The hours and minutes are read on a spherical, convex micro-dial under the rightmost sapphire dome with its two curving hands of hand finished and blued steel that precisely follow the curving dial’s exact form. The fully visible, twice-inclined flying tourbillon is situated under the sapphire dome on the left, providing running seconds via a blued index placed on the edge of the tourbillon cage. The mesmerizing beauty of the fully visible, patented and tilted tourbillon echoes the display of the three-dimensional hours and minutes window. It perfectly and harmoniously balances the symmetry of the front, directly evoking the half hunter timepieces and marine compasses of previous centuries. In addition to these details, the entire front of the DC 6 Solstice Titanium Half Hunter “1740” has been gently and almost imperceptibly inclined; standing slightly higher in the case at the 12 o’clock position and lower towards 6 o’clock. This unusually positioned bezel comfortably enhances reading the time, thus providing an optimized field of view for the user. Like the original 1740 model, the DC 6 Solstice Titanium Half Hunter is also fitted at 6 o’clock with the unique retractable crown, for which David Candaux has received two patents.