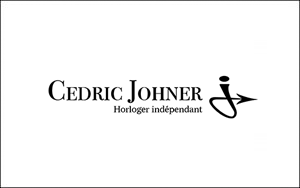 Cédric Johner, jeweler & master watchmaker, is celebrating his 30th anniversary as an independent and guardian of ancestral watchmaking know-how. On this occasion, he presents the reissue of his iconic watch: the Abyss model.

His career has been shaped through many experiences, starting with jewelry at Chopard – where all began – to the world of watchmaking creation, where he created his brand, Cédric Johner, in 1997. 30 years of excellence in watchmaking and jewelry have shaped its know-how.

He is one of the rare watchmaking craftsmen to practice his art in a traditional way without the help of new technologies. It is sufficient to discuss a few minutes with him to transcend the ages and realize this extremely rare heritage. His mastery of traditional tools and his thoroughness are the guarantors of this unique know-how. He is often said to be a genius; evolving with a great open-mindedness while perpetuating and sharing knowledge from another era.

To celebrate his 30 years of activity, Cédric Johner has decided to reissue a unique timepiece, reflecting his know-how and highlighting his creativity. It brings its trademark Abyss watch form back, invented in 1997 and which has since become legendary across the world and through the ages.

The lovers of beautiful pieces are already delighted…For the first time, he is offering this Abyss Chronograph column wheel model in 316L steel with exceptional finishes. Customers take part in this creation by having the possibility of choosing the color of the dial, the artisanal finishes of the movement, as well as the bracelet. As usual, almost all of the components of this watch are handcrafted by Cédric Johner in his workshop in Carouge, step by step. Each model is emotional and characterized by the uniqueness of its finishes. Highlight of the show, the Abyss Chronograph column wheel model in 316L steel is limited to 30 pieces, not one more, all numbered and having a reference certificate.

This launch is taking place in two stages: a first, where the watch is available for pre-order for the most loyal and prestigious customers of its brand; and a second stage, where the watch is put on sale to everyone. The fastest will be able to choose their limited number directly via the online reservation system. 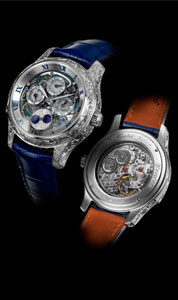 “Maestria” is the new and unique timepiece that I entirely manufacture in my Carouge workshop in Geneva.
Manufactured in 950 Platinum, this timepiece is embellished with an engraving carved by hand over the entire case.  Maestria holds a minute repeater mechanism along with a skeleton perpetual calendar.
More than two years of work have been necessary to bring together this set of craft techniques among the most prestigious.
A great experience and knowledge of this exceptional and rare 950 Platinum material have been required to use traditional methods to realize such a case.
The engraving by hand, so refined, is achievable only with an unfailing mastery of the stall and patience to any test.
The minute repeater mechanism is enhanced by a skeleton perpetual calendar, all the finishes were made in the respect of the oldest watchmaking traditions: chamfering by hand, polished stuck with zinc, Côtes de Genève made with boxwood.
With “Maestria” I wanted to set the tone for excellence and watchmaking know-how by bringing together complications and the most prestigious craft techniques. 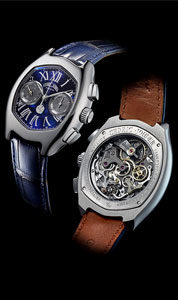